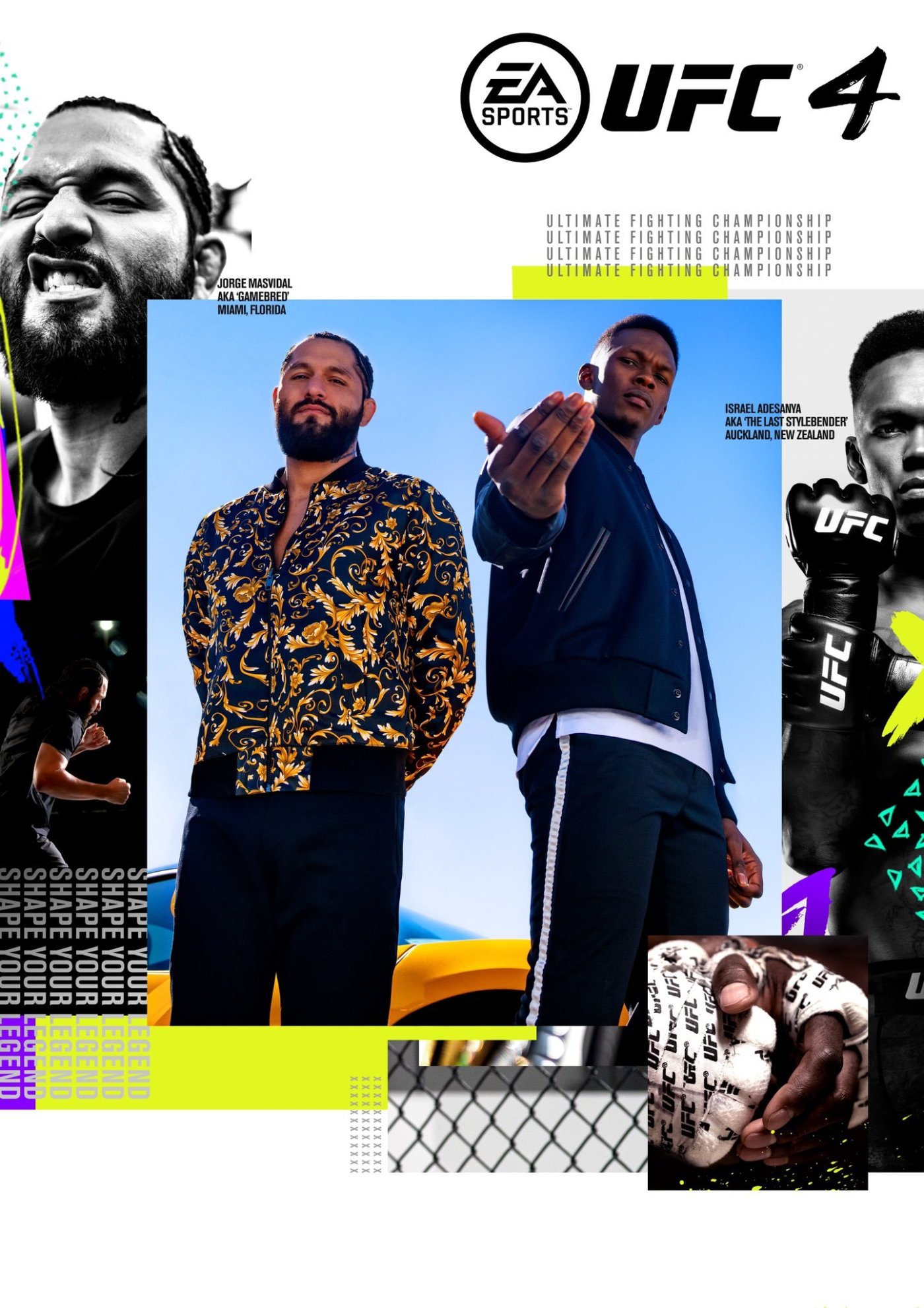 Over 2 years after the release of UFC 3, EA and UFC have officially revealed UFC 4. UFC 4 is set for release on PlayStation 4 and Xbox One next month, August 14th. The game features cover star’s of Current UFC Middleweight Champion Israel Adesanya and Jorge Masvidal, who’s challenging for the UFC Welterweight Champion against current champion Kamaru Usman in a couple of hours at UFC 251. UFC 4 will come with a Pre-Order bonus of boxes Tyson Fury and Anthony Joshua, along with a Backyard Customization Pack and Kumite Customization Pack containing cosmetic items. With all of this info also came a reveal trailer which you can look at below.

As to be expected from a new release in a sports video game franchise there’s a bunch of new additions and upgrades to UFC 4 in many departments as told by EA in their press release.

In EA SPORTS UFC 4, the fighter is shaped by their fight style, achievements and personality. Players can develop and customize characters through a unified progression system across all modes to go from unknown amateur to UFC superstar in the new Career Mode. New to UFC 4, players can also experience four all-new environments, including The Kumite, The Backyard, UFC Apex and Action Avenue, or challenge the world in new Blitz Battles or Online World Championships to become the undisputed champ. Performance details like weight class and one of five MMA disciplines, including Wrestling, Jiu-Jitsu, Boxing and more, define how players fight, while over 1,600 new pieces of earnable gear, over 120 emotes and more allow players to put their personality on display while doing it.

In gameplay, fluid clinch-to-strike combinations offer more responsive and authentic stand-up gameplay experiences, while overhauled takedown and ground mechanics deliver more control in those key phases of the fight. No matter how or where players play, EA SPORTS UFC 4 puts them at the center of every fight. Fluid clinch control brings RPM into the art of the ‘clinch’, adding a key element of strategy to the striking system. RPM Tech drives a takedown overhaul, with a slew of new takedown animations, driven by player control and fighter attributes. A new submission system was built to offer a simplified player experience, with more ways to transition into submission attempts, accelerate a finish, or deploy high-impact slams to escape them.

Additionally, an overhaul to Career Mode introduces a brand-new way to develop fighter backstories and offers an in-depth evolution process for the duration of the fighter’s career. The new fighter evolution feature lets players dictate a fighter’s skillset, as every punch thrown, or every takedown executed builds fighters up in that specific discipline. Relationship Building brings the impact of partnerships and rivalries into UFC 4, learning from both friend and foe to gain experience and learn vital skills. Players can pick their path, which allows them to choose the fights, weight class and rivalries they want, ensuring no two careers are alike.

The one thing we don’t know is will your purchase of UFC 4 on PlayStation 4 and Xbox One carry over with a free version to the inevitable PlayStation 5 and Xbox Series X versions surely coming at some point in the future. I’m sure EA will announce will shed some light on that soon, but I’m almost 100% sure they’ll go the Cyberpunk 2077 route and have the purchase carry over.